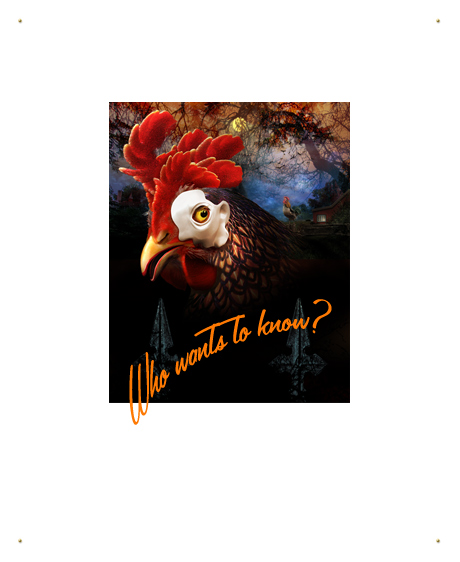 The luckiest person on the planet, he lives with his wife, dog, cat and a transient population of wild and not-so-wild animals on a small farm in the beautiful KwaZulu-Natal midlands of South Africa.

He trained as an interior designer, designed houses, shop interiors, exhibition stands and fashion shows, played drums and worked as an art director before drifting into fashion and advertising photography.

In 1993, he became inspired by the story-telling possibilities of digital manipulation of his photographs, and developed a style of photo-illustration. His technique consists of taking lots of photographs, throwing them into a photo-snaffling machine, stirring it up, and sticking it all together with computer glue. Lately he’s been carefully cultivating, and chopping up some tasty CGI morsels to throw in as well.

He has a simple work philosophy of “Enchant yourself, and you will enchant others” which he combines with a love of detail, and a fascination with non-verbal communication.

He works with major clients, ad agencies and publishers in the UK, USA, South Africa and Australia. He also is working on illustrated childrens’ book concepts and other personal publishing projects.

He has had a range of greeting cards, calendars and posters, “Cow Planet” being published under licence in Holland, and which has sold more than 300 000 worldwide.

He is passionate about animal welfare and biodiversity conservation concerns, and a percentage of proceeds of sales from all he does is donated to animal welfare.

*Won a gold and a silver “RX Club Award” in New York for work produced for Glaxo Smith Kline.